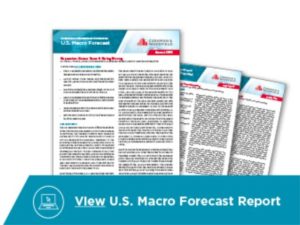 “Even before the election, the U.S. economic fundamentals were showing signs of heating up,” said Kevin Thorpe, Cushman & Wakefield’s Global Chief Economist. “We observed a big GDP number in Q3, accelerating wage growth, surging consumer confidence – a string of really robust trends were already forming. Now when you layer in the expected tax cuts and spending multipliers from the New Administration, it creates an even stronger economic backdrop for the property markets heading into 2017.”

Although it will take time for policy to form, Cushman & Wakefield expects that President-elect Trump, alongside a Republican-controlled House and Senate, will deliver fiscal stimulus measures that will further boost the U.S. economy and property markets. That said, Thorpe notes that some of the expected growth in fiscal policy will be negated by tighter monetary policy, higher interest rates, higher inflation and more global volatility.

On net, Cushman & Wakefield forecasts the U.S. real GDP will grow by an upwardly revised 2.3 percent in 2017, and will hit 3.0 percent in 2018. “This will be enough growth to generate over 3 million net new jobs over the next two years and an increasingly robust environment for consumers,” said Rebecca Rockey, Cushman & Wakefield Head of Americas Forecasting. “This will drive more demand for real estate space than was previously assumed.”

By and large, the outlook for the U.S. economy over the next few years remains positive. “Although headwinds have come and gone and come again, the major force driving growth – the consumer – is still gaining momentum,” Thorpe concluded. “Of course, we are ushering in a new era of fiscal and monetary policy, and that will continue to generate uncertainty. However, we believe there will be a net positive impact on economic growth as well as the property markets in 2017 and 2018.”