June 29, 2018 / admin / Comments Off on Suburban Office Parks as Opportunities

Throughout the nation, the suburban office park is under pressure as large corporate users move back to cities or go out of business altogether. As suburban office parks have closed, towns are losing an important source of revenue. Nowhere is this trend more on display than New Jersey, home of many corporate headquarters. To fight back, redevelopment and reinvention of these properties is taking many forms, from conversion to residential with an affordable component, to mixed-use office, retail, and residential. One of the best examples of repurposing is the former Bell Labs research center in Holmdel, NJ. Originally designed by Eero Saarinen, the 2-million-square-foot complex was vacant for years before the current conversion, which features coffee shops, pop-up restaurants, and a soon-to-be-completed wine bar and food hall.

CRE Matters was created to help you become savvier about the trends affecting commercial real estate. Following are this week’s hot topics.

Last Friday, the Trump Administration implemented 25% tariffs on approximately $50 billion of goods the U.S. imports from China. Cushman & Wakefield’s research report, “U.S. – China Trade Tensions: Impact on Property Markets,” addresses how these trade tensions impact property. Highlights include:
• Property markets in both the U.S. and China have thus far seen very little impact from the trade tensions. China has absorbed a record 72 msf since the Trump Administration took office, while the U.S. industrial sector (the one most likely to be impacted by trade disruption) is seeing record levels of occupancy at 95%.
• However, increasing and more complex economic linkages between the U.S. and China mean a higher than ever possibility that tariffs and counter tariffs will impact economic activity. In 2017, the U.S. imported $505 billion worth of goods from China and exported $130 billion. A policy that raises import prices and leads to retaliatory restrictions on U.S. exports could impact U.S. economic growth and therefore property markets in the U.S.
• Cushman & Wakefield believes that fears of a full-blown trade war are overwrought. Both countries have many reasons to compromise. Cushman & Wakefield research will continue to monitor the evolving trade situation and provide updates.

The U.S. economy is humming. Consumers are confident and spending, businesses are hiring, and small businesses have never been more optimistic.
• After a soft first quarter, retail sales have come on strong in the second quarter. U.S. retail sales jumped in May and are running at a healthy 5.3% rate in Q2 2018. Sales at department stores and apparel stores jumped 1.2% and 1.3% respectively in May. Retail sales account for roughly one-third of all the spending in the U.S. economy, so these reports indicate that the second quarter (which ends in two weeks!) was much stronger than the first.
• Small businesses, the backbone of the U.S. economy, remain bullish. The National Federation of Independent Business reported that small business optimism surged to a new all-time record in May, the third record high in the last six months.
• One reason for this optimism is rising profits. More companies than ever reported that profits have increased in the last three months. This is likely due to the tax cut passed in December. Small businesses are raising compensation at a record pace, boosting incomes, and supporting that increase in retail sales.

The Fed increases rates.
• Acknowledging the strength of the economy, the Federal Reserve’s Open Market Committee raised the Federal funds rate target range to 1.75% – 2% last Wednesday and indicated that they will raise the funds rate two more times by year end.
• Higher interest rates can affect property values, so we need to watch the reaction in both the bond market and property markets.
• However, our sense is that because the tightening is primarily driven by strong economic growth, which should lead to more income growth, these increases will not have a material impact on pricing. Still, we will be monitoring trends in the bond market and property markets more closely going forward.

Media merger approved, and more in the pipeline.
• A court approved AT&T’s takeover of Time Warner, throwing out a Justice Department anti-trust challenge on Tuesday. The roughly $80 billion deal closed on Thursday.
• This approval of vertical mergers between producers and distributors of content has already led to more bidding in one announced media deal. The Walt Disney Company’s agreement to purchase 21st Century Fox for $52 billion was countered by Comcast, Inc.’s unsolicited $65 billion offer.
• With more viewers dropping cable altogether (“cutting the cord”), these mergers are seen as necessary for distributors to remain competitive with other content producers and delivery systems. 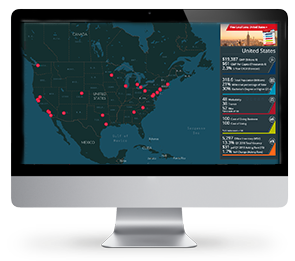 How 25 Top Markets Stack Up on Tenant-Focused Metrics

The economy continues to grow as strong business fundamentals drive commercial real estate across the country. Just as companies fervently battle to attract much-needed talent, cities are engaged in their own battles to draw and retain companies.